On a cycle track in Betteshanger Park, near Deal, Kent, United Kingdom

Macronencer, being utterly mad, is planning a 300-mile round trip to this hash point because the alternative is to stay at home and tidy up his office. The Power of Procrastination strikes again! 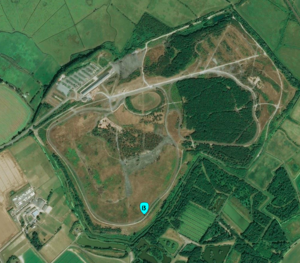 Having taken a day off from geohashing on Thursday, I was keen to get somewhere on Friday. There were a few possible options, but the one that really caught my eye was on a cycle track in a park, right on the east coast of Kent. I soon realised it would be a long drive for me. I’m averse to motorways when I’m trying to relax, so I worked out a route that avoided the M25. It was about 150 miles, and would take me 4 hours! Actually, in my efforts to skirt built-up areas I soon realised that I was making a relatively straight path, and I started wondering whether I might be able to qualify for a Juggernaut achievement! So I fed the problem into my turbocharged GPU-driven obstacle analyser (I printed a Google Maps route onto paper and took out my steel rule and a pen). Careful measurement revealed that the best aspect ratio I could manage was 16:1, a long way short of the 20:1 required. The Juggernaut Achievement is hard! In my case, the main problem, ironically, was the whole area around Queen Elizabeth Country Park, where I did a hash recently. There are no roads across it, and it happens to lie directly in my path to Kent. I think Juggernaut is one of those things that would be great for extreme sports enthusiasts in mountainous terrain, but getting one in my car is going to require no small degree of luck.

Where was I? Oh yes, spending most of my Friday driving! I did half a million metres in the end, but I think it was worth it, as I have not only expanded my territory two graticules eastward but also ended up exploring a couple of nice areas I’d never seen. On the way to Kent I drove through Rye, a little coastal town at which I’d spent a week’s holiday as a child. It was an odd feeling, as I’d never returned until now.

The Kent Downs is a beautiful area, though if you plan to tour it you should probably get on a bike. The roads are almost all bumpy, winding and just narrow enough to cause issues passing oncoming traffic. The drive was scenic but stressful! 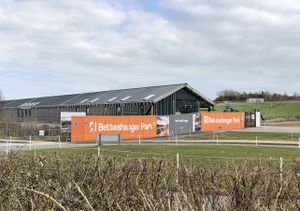 I arrived at my destination without getting out of my car once in four hours, a feat of which this fifty-four-year-old is quite proud. The place is called Betteshanger Park, after the local village. I wasn’t sure how the locals pronounced it, and as it turned out I couldn’t ask any of them because the place was almost deserted! It’s actually in the process of being improved, and a large hospitality building is half-finished. The only people I saw were generally zooming past me on bikes, and there were so few of them that I didn’t even manage to get any on camera because I got tired of waiting. It occurred to me that the name might be pronounced like “Beech Hanger”, as there seemed to be a lot of beech trees there. According to this article, it’s pronounced “BETS-hanger”.

I had thought about hiring a bike while there so that I could cycle right through the hash point, which happened to be directly on the cycle path. However, the bike hire kiosk was closed! So I set off widdershins around the pedestrian track – the fastest way to the hash point.

There were some thorn bushes between me and the cycle track just where I needed to get through, but luckily there was a gap a little way down to provide access. I did a quick GPS Dance on the cycle track. This was strictly against the rules, but although I’m sure I would have been risking a collision in the summer peak season, today I was more likely to have a stray meteor hit me than a bike.

Does anyone know how to make the MotionX app take GPS readings more frequently, by the way? It’s really frustrating when it gets "stuck" on one value and won’t move until you’ve walked away about 20m and back again. It’s like my stupid bathroom scales, which give me the same reading as last time if my weight’s only changed a little (I swear they’ve done that to cheat on consistency standards tests, and I always fool it by stepping lightly on it first so it forgets my last reading). Anyway, I got to 5m, with an accuracy radius of 6m, so yay!

Things I remembered this time:

Things I forgot this time:

I do have a checklist that I try to use when on site... but there isn’t a checklist to remind me to check my checklist, so I’m always checked by the chequered hand of fate. 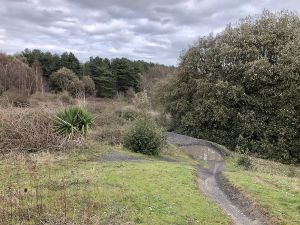 After I’d finished at the hash point I set off around the other paths through the park. There’s a lot of interesting terrain here, and it looks like heaven if you’re into mountain biking. There are advanced courses in the trees and everything. There was quite a lot of mud, but nothing I couldn’t circumnavigate, because of the high linkage of the graph, as it were. I walked about 4km in total and the only drawback to the whole visit was the lack of a café due to the ongoing refurbishment.

On the way home I took a route that led further north, and stopped in a place called Marden to charge Dash. It’s a very pretty town, and I even found The Old Post Office coffee shop, which was a superb place for a quick rest. Friendly staff, well-kept and with pleasant decor, including a mural of the High Street that was hand-painted by a friend of one of the women serving me. I noticed a tiny little cartoon character in a sombrero going into one of the doors, and she told me that was the artist’s signature. Apparently not many people spot it! I had a coffee with Almond milk and a vegan Blackberry Crumble Slice. Absolutely lovely place, and I was lucky to get there just before they closed.

That’s another graticule visited! Kent is beautiful (at least, the off-motorway pieces are...)