Outside a house in Bramshott Drive, Hook, Hampshire.

Saturday Meetup! 4pm Outside a house in Bramshott Drive, Hook, Hampshire. It's conveniently near the station for those willing to brave public transport. It's also PI DAY! So perhaps bring some pie. Or 3.142 of something. --Macronencer (talk) 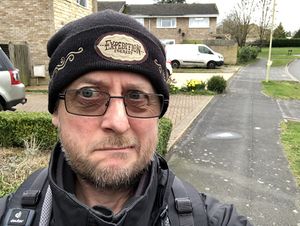 As this hash looked pretty easy to get to, I was hoping I might get some other people turning up. Here's the thing, though: if a hash is on a pavement (sidewalk) in a residential cul-de-sac, then it tends to be one of the more uncomfortable places for a solo hasher to hang about. People in their homes have every right to be a little suspicious of a stranger hovering outside, fiddling with a GPS unit (though a phone is of course much less threatening these days) and doing a strange back-and-forth dance with a frustrated, hounded look. If said stranger takes out a stuffed toy, places it on the ground and begins taking photos of it, then certain authorities are liable to be notified by telephone and may arrive bearing awkward questions. The whole thing is much easier if there are several hashers involved, since people tend to trust anyone who isn't a "loner" (however unjust that may be).

It didn't help when, just as I was about to photograph myself at the hash point, I noticed a young girl playing in the background! I had to wait until she had gone away before taking the photo, or my chances of arrest would have shot up significantly!

So, you can see where I'm going with this, I think. Nobody else turned up, and there was I doing odd things in a housing estate in Hook. To be honest, once I'd got the co-ordinates and 4 p.m. have come and gone, I got the hell out of Dodge, not even allowing Chuck out of his bag. I'm hoping my next "Saturday meetup" might be a little less stressful!

Oh, and I didn't even bring any pie, because the shops were full of rabid panic-buyers stocking up two years' worth of essentials against the COVID19 plague. I wasn't about to rub shoulders with a crowd like that. I don't feel I belong in Waitrose at the best of times... :-\

Not much else to say, which isn't like me at all. I think I'm a little tired today. I'm currently embroiled in family travel arrangements for my aunt's funeral, and things are a bit fraught. Expect my hash rate to drop a little in the next week or two!