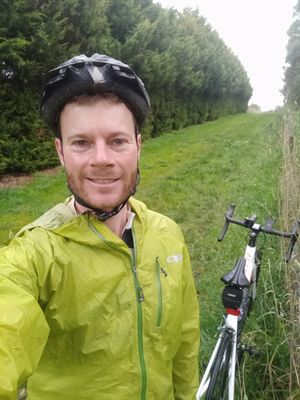 On a horse easement at Wattleglen near Kangaroo Ground.

Stevage alerted me to this one. Unfortunately, we couldn't arrange to go at the same time with both having conflicting activities. So I set off on my own on my new road bike from Kensington.

I took the standard bike paths to reach the Capital City Trail and St George's Rd. The weather was cool and cloudy but the promised rain was never quite eventuating.

After riding a few kms up the centre median bike path of St George's Rd I came to the northern reaches of the path I'd never got to before. It was a very convenient way to get to Reservoir station, if you ever want to go there.

The path followed the underground Melbourne Water pipeline easement until just near the M80 Ring Road, whereupon it descended into a confused mess requiring me to jump several kerbs and negotiate grassy verges.

The Ring Road bike path, however, which took me east, was great. In bush, highly grade-separated, and taking me to a part of Melbourne I'd never explored. I came across a section of the Ring Road I recognised as from a scene in That Sugar Movie, which I'd been trying to identify for years.

Unfortunately, even this came to an end. I found myself lost in a gated retirement village cul-de-sac somewhere around Greensborough and navigated out via a pedestrian path behind someone's house.

The last few kms took me into Wattleglen, a suburb of tight roads and rolling hills. It wasn't long before I was at the hash, on a horse riding easement (okay, just over the fence from that into someone's property, but that's not important). I took the necessary photos and headed out.

On my return I decided to follow the easement rather than retrace my steps. This required more grass-riding. The path dumped me onto an unsealed dirt road, which wasted a steep downhill. A few wet turns and I was back onto the main drags.

When I got to Eltham I decided to take the train home. We were seeing people that night I was keen not to be late. After reaching home I then retraced the train journey - our evening plans were back in Watsonia, not too far from the geohash location.