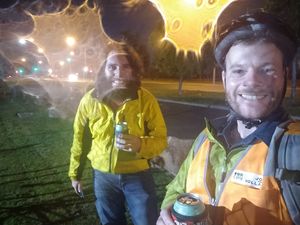 On a grassy verge on a main road in industrial Laverton (or Laverton North, more accurately).

To rack up three consecutive geohashes this one was well worth it. When the geohash first came out I thought I wouldn't have time to get there and back - I was having dinner with a friend in town. But he has kids and could only come out after they'd gone to bed, thus leaving time for me to do the geohash after work. Kids are so useful!

I messaged my buddy Lachie and we met up in Footscray after I finished my workday at my actual physically going-to-work job. It was raining a bit so we wore our wet weather gear. We soon zoomed off into the gloom.

We alternated between riding along heavily under-construction but sparsely trafficked western suburbs arterials and the Federation Bike Trail following the old sewerage outflow aqueduct, including one section that was completely flooded and required us to navigate a very slippery embankment, coating our single-speed bikes in mud. But after a while we approached the hash-point - a location on the side of a wide, industrial road next to ARC steel reinforcing and Cyclone Fencing Industries.

Here, Lachie popped out a couple of beers he'd secreted somewhere on his bike-person and we drank a toast to the hash. After a few minutes discussing alternative hashing algorithm seed stock options for geohashing (my suggestion, less capitalistic than the Dow Jones Stock Price Opening, was the number of characters in Wikipedia at midnight GMT) we departed.

For some reason, our alternative route home involved riding on a lot of footphaths, many terminating abruptly in grassy strips - it still being in the Industrial Outer West, of course. At one point we tried to follow the Federation Trail to its easternmost extent but got blocked by Westgate Tunnel construction works (what an annoying project!).

The final stretch presented us with many interesting wildlife encounters. Perhaps fodder for Lachie's Fauna page: [1].

At last we were back on the Maribyrnong. I peeled off at the old abattoir stockyards in Kensington Banks and headed home where I would change for my dinner out.

Here is the route I took. Lachie rode further, starting and finishing at Ascot Vale Rd.