In the forest on the Adlisberg next to Zürich.

I went to the Main Station, grabbed a sandwich for late lunch and ran to the bus 31. It brought me to a close by stop and from there it was a short walk.

The direct access to the hashpoint was blocked by a huge pile o wood, so I had to circle it. Around the corner of the pile I heard noise coming out of the direction towards the hashpoint. I didn't expect that but some one is there after all??? Coming closer a couple with bikes came through the not so bike friendly forest with thorns and bushes and no trail. Wehre they at the hashpoint with bikes? Did they had sex there for the achievement? They didn't look so happy tho and just mumbled some thing about a lost path when I talked to them. There is no trail or path there. Wired. It seams to me they didn't know about the excitement hidden just a few meters away!

So I went on and circled the point from the other side until I had a good lock in a tiny clearing where the sun broke through the trees. Nice! But no good spot for sex with all that thorns here...

I took some pictures and waited about have a hour while solving GeoCaching mysteries. I also spottend a GeoCache just 69m (79m with my measurement) away which I found the previous year. I went there and had to search for a while but found my entry in the logbook. 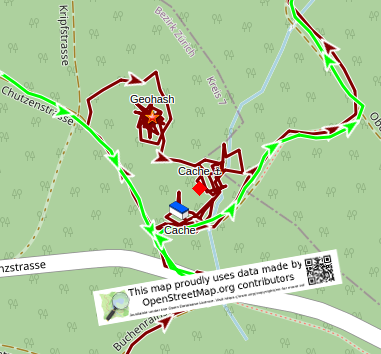 The green track is the one from last year, the red the one from the trip to this hashpoint. It is clearly to see that I spent way more time to finde the cache the second time than the first. The hashpoint was also not a challenge compared. So this proofs I did not even remember the place (nor visited the haspoint exactly before). Also some trees need to stand in the way to have line of sight for the cache. So no djà vu and no hash collision. Dam!