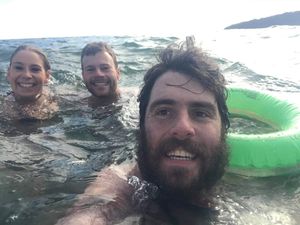 300m out to sea at Dromana. This is the first successful geohash from the -38 144 graticule on the east side of Port Philip Bay.

This one was up there on the awesomeness scale.

Stevage first noticed the gettability of this hash and posted on our little GChats Geohashing group asking, "Who's up for a swim at Dromana tomorrow?"

It turned out later that Stevage was just goading us on and wasn't going to join us on his suggested epic journey. But it was too late - Lachie and I were already too amped to be dissuaded.

I spent the late evening up to 11pm the night before our hash sorting out my bike - cleaning the chain, pumping up the tyres etc. Lachie spent it inviting his sister Laura to come along with us. Both our efforts were successful and we started off at 7:45 the next morning.

Lachie had met me at my house and we rode off together through the city. At Gardiners Creek bike path we were joined by Laura and together explored the myriad bushy bike paths of the eastern suburbs. Urban Forest Reserve, the sub-SkyRail Djerring Trail (a new favourite) and then the EastLink bike path, of which I showed off having been involved in the construction of some sections when I was a graduate engineer 14 years ago.

Soon the EastLink bike path gave way to the Dandenong Creek bike path following the Patterson Lakes estuary where many mariner estates displayed a tropical look reminiscent of a North Queensland/Darwin style. A sharp left took us onto the brand-spanking new Franskton SkyRail bike path - a similar design to the Djerring Trail - which was very good to ride on.

Soon we were onto the roads, travelling from Frankston to Dromana, detouring only to take the scenic route along the Esplanade at Mt Martha which offered great views of the Bay. We stopped at the beach most adjacent to the hash and prepared ourselves for the plunge.

It took us about half an hour to get undressed and to sort out our various methods of doing the navigation. Lachie had suggested that he take charge of the navigation on land and I be responsible for navigation on sea. I had my new smart watch with Strava recording (then at only 23% battery power) as well as my old, legacy GPS from an earlier age of geohashing, which was built to be waterproof. I'd given it new batteries and pre-loaded the coordinates the night before.

Lachie had brought an old iPhone as a backup to record location, carefully sequestered inside a waterproof bike mount and several snaplock bags.

We secured each of these items to our persons and forged on into the waves.

The water was initially freezing. I had a sudden feeling that we were doing a bad thing and that we might actually be putting ourselves in danger. It was the middle of winter, a fairly cold day with the wind up and sky cloudy. The water chilled every part of my body as it was submerged. Was this a mistake, swimming out 300m into the ocean - probably a total swim of 700-800m - as others had warned us? (I usually ignore this sort of caution from other people).

But once fully in and breast-stroking clumsily but energetically I warmed up, espcially once the sun shone on us through a gap in the clouds. It was obviously cold but after the initial numbness the feeling went away. Laura reported that she had trouble operating her fingers but these weren't really necessary for the task ahead.

But then, sadness. I took the GPS out of my boardies' back pocket and it wouldn't turn on. The water had got in and it had drowned. There was even a miniscus halfway up the screen. I had failed in my duty to be On Water Navigator and had also lost the GPS that had served me so well on geohashes from 2008 to about 2014. Then, shortly afterwards, my watch ran out of battery power, deleting its trace of our route.

But luckily Lachie had a backup in the form of his old iPhone. He took it out of the snap-lock bags and operated the screen through the bike mount. 90m to go, a bit to the left.

Since he wasn't confident it would stay dry we had to hold it above the water and swapped it around between us (with some discussion as to who was not pulling their weight since paddling with one arm was a nuisance).

But at last we got there. I briefly saw the distance drop to less than 3m and we took a screenshot, did the obligatory hash photos and with great relief we headed back the 300m to shore.

On our frustratingly slow way in we gradually resolved a group of bystanders on the beach, seemingly monitoring our progress. When finally we could touch the sand beneath our feet we gave out a celebratory shout and the bystanders moved off. As we stumbled onto land the last pair standing told us that beach-goers were watching our progress and didn't want to leave us until they knew we were safe. That was very nice of them especially since we were out for a whole 45 minutes.

Freezing, we dried ourselves and dressed - another activity that took about half an hour. All three of us were shaking violently once we were exposed to the air and maybe this was related to our tardiness. We jumped back on our bikes and headed to the nearest (good) brewery for post-hash beers and a pizza feed.

I needed to get back home by 6pm so we planned to take the Sandringham train from half-way up the Bay (rail replacement buses plagued every other south-eastern line thanks to SkyRail works). Since we were blessed with tailwinds in both directions for this ride we made record time and in fact realised that riding all the way home would be quicker than waiting for a train so we pressed on.

Full of adrenaline we flew along the coastal roads and bike paths, basking in the cool glow of the sunset over the water (or behind the You Yangs beyond). Laura peeled off at the Port Melbourne Light Rail bike path, her rear light's battery fading with the sun (our last technology fail), and Lachie departed at lower Kensington. I arrived home at 5:55pm - the last task for today's hash completed (apart from this write-up).

Here is our route to the beach on Strava and here is Lachie's swim trace.