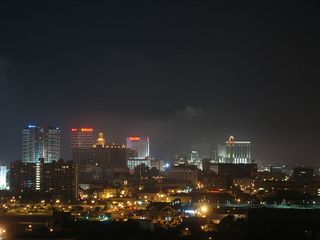 The Atlantic City graticule is at 39 N, -74 W. It encloses nearly all of South Jersey, including the majority of the Jersey Shore, from Dover Beaches and Seaside Heights to North Wildwood. Roughly a third of this graticule is in the Atlantic Ocean. A small chunk of Delaware Bay is also enclosed.

August 22, 2010: The geohash is actually in Atlantic City! On the beach near Metropolitan Ave. and Rhode Island Ave.

August 25, 2010: Keeping with the beach theme, the geohash is on the boardwalk in Seaside Heights, near H St.

September 17, 2010: On a street in Leisure Village. Jevanyn and his motley crew will be there, and finally reach a geohash in this graticule!

Places in this Graticule

Jevanyn passes through on his way to Cape May.

Retrieved from "https://geohashing.site/index.php?title=Atlantic_City,_New_Jersey&oldid=11056"
Categories:
This page was last edited on 16 September 2013, at 23:41.
Privacy policy
About Geohashing
Disclaimers