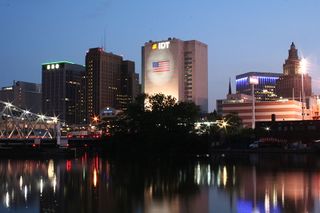 The Newark graticule is at 40 N, -74 W. This graticule is among the most populous in the United States, with a population in the neighborhood of 7 million people. It includes almost the entire northern half of New Jersey, the most densely populated state (Census), as well as Staten Island, western sections of Brooklyn and lower Manhattan in New York, and a part of Pennsylvania northeast of Philadelphia. In addition, other than Raritan Bay, there are no large sections of water.

The New York Stock Exchange, where Geohashes are generated, is located in this graticule. On February 4, 2019, the hash location fell approximately six blocks from it.

Interesting reachable locations will be posted the same day as they come up. The 80%-90% rate of private property discourages me from updating more often.

Meetups are usually worked out between geohashers when an accessible location comes up. Get to know your neighbors :-)

The geohash for the date in the original comic (May 26, 2005) is challenging but reachable, in Mill Brook, Morris County. If you make an attempt, tell us about it here!

Cities in this Graticule

* - The area, in the northern reaches of Philadelphia, is partially within Newark, NJ graticule.

This list includes known expeditions from the current year. Apparently, any expeditions (?) from 2017 and 2018 were never recorded. Previous years are archived (see below). Click here for the automated list.

Zillow real estate valuation site, to find out if it's private property / a rough neighborhood / both.

And of course Wikipedia to find out which township/borough/county a geohash is in :-)

Google Maps does this automatically sometimes.

Wanted: a good bike-map website. NJ Bike Map.com is okay but doesn't include a lot of local bike trails.

Google Maps has a bike trail layer, too.

Retrieved from "https://geohashing.site/index.php?title=Newark,_New_Jersey&oldid=842044"
Categories:
This page was last edited on 2 July 2022, at 01:44.
Privacy policy
About Geohashing
Disclaimers