The Richmond, Virginia graticule is at latitude 37, longitude -77.

Most recent proposals/comments at the top, please. 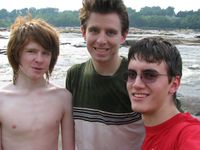 9-27-2008: Dan had the brilliant idea of a meetup at Echo Lake Park rather than the original meetup point. However, upon driving by the park at the appointed time, he discovered the park was closed for lake7 dredging. Oops.

6-14-2008: Peter read the blag and met up with Randall and Doug on Belle Island downtown since Aylett is a bit too far away. There was a kayak competition going on, and swimming was had by all despite nobody thinking to bring a swimsuit. Alternate meetup site = success. Pictures here

5-31-2008: Shoofle and Julie met up with Paul in Suffolk County Saturday afternoon for a nice visit and some time kicking around a soccer ball. We didn't get to exactly the right spot, but it was close enough. Pictures here

5-26-2008: stepol (and their kids) from the Central Virginia Geocaching Association made a Memorial Day run to the Shady Grove location.

Retrieved from "https://geohashing.site/index.php?title=Richmond,_Virginia&oldid=826769"
Categories:
This page was last edited on 15 January 2022, at 21:20.
Privacy policy
About Geohashing
Disclaimers