From Geohashing
Jump to:navigation, search
This was not a retro meetup, but a beta test of the algorithm. It really did take place in February. Please stop categorizing it as Retro 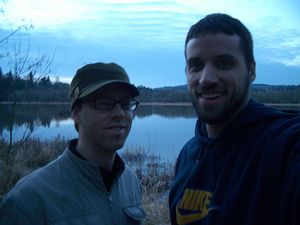 NoTerminal and Drache at the hotspot

Near La Center, Washington, near a flood wall??

These coordinates were located in the Portland graticule on 2008-02-19, After some nasty looks from the local rich-folk we had to scramble down a flood water was to get to the coordinates.

Note that it indicates that the point was reached at 4PM PDT (Although February would normally be Standard Time, not Daylight time. Jiml 02:19, 10 January 2011 (EST)

Jim headed north on the Hwy WA-503, which leads to Hwy WA-502, which takes me back to Hwy I-5 (which heads North to Seattle.) A couple of exits north I hit La Center, which is where the Feb 2008 hashpoint is. I found my way onto the correct side road, and eventually got close to the hashpoint.

Then things started to go awry. But the first apparent roadway in was labeled Private, so I figured I'd see if there was another way in. I went down the road in an attempt to go around, but that didn't help. I backtracked to the obvious pathway in. It was confusing, since it seemed to be marked as a Public road as well as a private road. I saw some folks go in, which made me suspect it was just a shared driveway, so I went partway in to see what the setup was. There were a number of houses, so it really was a shared roadway.

I finally noticed a "Dead End" sign, which made me think there wasn't another way in, at least to the paved section the area. I'll dig for more info to see if I can figure out how the original expedition managed to access the site.