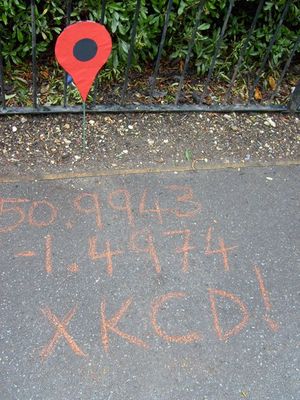 Identified the location on Dutton's Road

You basically come out of the railway station, turn right, walk 500 metres and you're there!! Too good an opportunity to miss. it's also right on the border of the swindon graticule which means a great opportunity for a joint meetup. probably have to be an evening due to work commitments.

From a close inspection of the satellite map, it looks as if it's on the pavement of dutton's road! no trespassing required, and no risk of death by standing in the road! it's just made of perfection isn't it?! :)

I may not make it for 4pm, as I am travelling down from Norfolk that day, and plan to do two other hashes on my way! However, it would be nice to see either some other geohashers or an xkcd sign, so please sign here for a temporally-displaced meetup. --macronencer 16:02, 24 July 2009 (UTC)

Just wondering ... what are the laws on drawing on the pavement with chalk? if a few people turn up it would be nice to make some temporary art together on the geohash point!

this is where we're going:

in fact, the precise location turned out to be a few metres further up than this image would seem to indicate, which just shows that you can't always trust google maps/earth to be accurate.

I arrived almost exactly on time, around 18:00 and parked in the Waitrose car park. Comms were achieved via SMS and soon I was greeting Sermoa near the hash point. It was a fairly pleasant place to be, though I had hoped for brighter weather and perhaps a few more people passing by so that we could explain what we were doing. In the event, we hardly even got a glance (except one cyclist, I noticed). We were not asked to move along by the police. Neither did the occupants of the house come out to enquire what the hell we were writing on the ground. I think we were invisible :)

Sermoa did a good job of leaving a marker, including the co-ordinates. I completed one of my side goals by leaving a Braille version of "XKCD".

There followed a pleasant walking tour of the town. I had not been there for a few years, and had forgotten how pretty it was. We adjourned to the Old House At Home for drinks and food, by which time the sky was brightening considerably. Dinner was followed by a couple of slices of my #cake (it's all gone now, as I took it to work the next day, much to the bemusement of my colleagues!).

All in all, a great day for me, rounded off by a nice meet-up. I hope we can get a few more Southampton/Swindon graticule people to join us next time - it would be nice to meet you all!

This being my first non-weekend geohash, i took the train to romsey straight after work, and got to the hash point for about 6pm. Whilst waiting for mike i took a few photos nearby and looked around for something with which to write on the ground. A stray piece of brick was just perfect!

Mike arrived and we ceremoniously wrote the geo coordinates on the ground. Mike wrote XKCD in braille for pure randomness! I thought it was amusing that the only people who would be likely to understand braille would not be able to see it! We took a few celebratory photos. Unfortunately we didn't have the opportunity to explain to anyone why we were there. I hope somebody might notice the coordinates on the ground and wonder what they mean.

Later on we explored romsey a little - it's a beautiful little town. we took some photos of the little shops, the abbey, and king johns house. We ended up at 'The Old House At Home' pub where we had a lovely meal and ate cake to celebrate mike's birth hash which mike visited earlier in the day! :)

whilst we were in romsey, we took the opportunity to have a look around the quaint little town. it is very pretty!