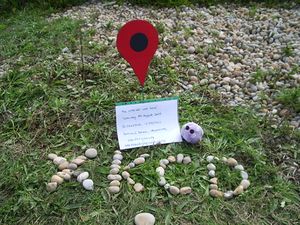 Successfully found and marked the spot

On portland beach! Just over the causeway from weymouth!

As far as i know it'll be a normal xkcd saturday meetup at 4pm! i will take the train there and be on the beach for fun and frivolity!

Looks like i can take the train from Winchester at 13:33 and go directly to Weymouth for 15:13. Chance for some coding on the train, win! then i'll walk from weymouth station to the geohash point in time for 16:00.

update: google maps says it'll take an hour and a half to walk from the station. so i'll take the train an hour earlier and still be there for 4pm. i hope some local weymouth people are coming ...? --sermoa 08:21, 8 August 2009 (UTC)

another update: i think the First Bus number 1 goes from weymouth railway station to portland. follow me on twitter for updates of where i am this afternoon! 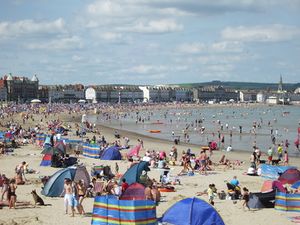 I took the train from Winchester at 13:06, coding all the way on my laptop (win!) and arrived in Weymouth at just gone 15:00. I walked down to the beach, faffed a while trying to find the right bus stop, ended up getting on the 501 which was an open-top bus so i got some great photos of Weymouth beach (which was PACKED!!)

As you get closer to Portland you see it looming out of the sea in the distance, like a big loomy mountain. one thing you don't get from google maps satellite view is the elevation. i imagined portland would be quite flat but in fact it's a very steep hill. 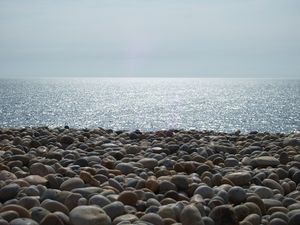 I got off the bus just over the causeway, mostly because i was afraid there wouldn't be another bus stop and i didn't want to go too far into portland. as i walked closer to the geohash i saw mike already busy arranging an xkcd marker with stones. we took some photos of the hash together and then climbed over the steep bank of pebbles to see the beach the other side. WOW!! the view was just astounding! the sun was shining on the water just like Secondlife with the Windlight viewer! the sea was a beautiful shade of blue. we walked down the other side of the bank and just sat on the beach chatting and enjoying the sun and water for about half an hour.

One thing i love about geohashing is you get to see places you might never see otherwise. When most people go to weymouth they probably stay on the overcrowded main beach. this beach was almost deserted and much more pleasant.

We had seen some buses going up the hill into portland. i had a bus day ticket so i quite liked the idea of going up to the top. which we did! my gosh, was the view incredible! we actually only went up as far as Fortuneswell so there's a lot of portland still to see. you could really spend a holiday there. From the top of the hill we had a fantastic view of the geohash point, and chesil cove and weymouth.

Haha cool, i just noticed there is a road on portland called Leet Close! We should have gone there!!

Note to self: Never assume that a coastline route is free of hills! This was physically a demanding hash for this unfit 44-year-old. I decided to get the train and take my bike, but I hadn't realised what the hills are like from Weymouth station to the causeway. Next time I plan to cycle anywhere, I will consult a topographical map :)

Anyway, the train journey from my local station (only a minute from my house) was pleasant. I arrived at Weymouth station at around 1420 so I had plenty of time to spare, and took it easy. When I got to the hash point I mis-read the GPS and thought it was at the top of the pebble slope. So I began climbing up, pushing my bike alongside me. It turned out I was wrong, and I had to come down again. The co-ordinates were actually on the grass at the bottom, with a view of the road, but not the sea. I took the usual photos, made a small marker, and then when Sermoa texted to say she was 20 minutes away, I expanded the marker into a bigger one.

Sermoa arrived in time for us both to be present at the official 4pm, which was great. It would have been nice to meet some more local hashers, but maybe next time. Due to the pebbles (not easy to tell it wasn't sand from the satellite photo) my Frisbee stayed in my bag :( However, we had a pleasant time just looking at the scenery and feeling the fresh air from the sea. I took some video, which I might post at some point.

We then took a bus to the top of Portland, and had a look around. It's a nice place, and reminds me a little of St. Ives in Cornwall. There are war memorials at the top, and plenty of scenic views, though we never got to see the lighthouses: they were probably too far over on the other side.

We walked down to the bottom again, and went our separate ways. I unchained my bike from its pole and began cycling back. The causeway was very easy as there was a cycle path, but the hills near Weymouth were killing me again.

At one point, a raptor reached out and caught my leg, but I managed to wrench it free. I suppose it could have been calf cramp, but I'm not sure.

Arrived at the station and hobbled (due to raptor injury) to the train. I was just sitting there texting Sermoa when she appeared beside me! So we shared the train ride home, talking about Ruby, geometrical algorithms and life in general.

I finally got home about 2120 and was so tired that I probably would have fallen asleep at the keyboard if I'd written this report straight away! But it was certainly worth it. A great Saturday meetup!