In a forest near Darmstadt.

Ekorren and Koepfel used to S-Bahn to get from the previous expedition (2010-03-13 48 8) to Heidelberg. At the platform, they met Ilpadre and and a few minutes later Fivetonsofflax, Euterkuh and a friend of them, the RNZ reporter. We entered the Regionalbahn to Frankfurt. In the train, we started eating the cake Ekorren bought in Büchenbronn on his previous expedition.

By 14:24, we arrived in Darmstadt Süd. From there, we started walking through the southern suburbs of Darmstadt At one point, we turned right into a residential area only to find ourselves in front of a small creek, with no bridge nearby. Even though this turned out to be avoidable, as there was a bridge for the main road a few blocks away, it was a perfect opportunity for some awesome pictures and a video (see below) of us leaping over the creek.

Next, we walked by a newly built police station. It was located at a busy road, with no biking path and only a narrow pedestrian path. However, in front of the police station, they decided t build a new pedestrian path, even with a wide biking path. Even though it's only about 150 meters long, it forces cyclists to get off the road and join the road again a few seconds later. Obviously everything is fully equipped with traffic signs pointing that out.

From there, we left the main road and continued on forest paths. We saw several art-sy objects that were placed along the path and came by a large rock that was apparently related to Goethe somehow. Time for some more action shots photos of Fivetonsofflax and Euterkuh for the newspaper article.

After that, we came by a small lake, also named after Goethe. The hash was getting closer, when we met a man asking us where we were going. This time, we explained geohashing to him and chatted with him for a while.

As 16:00 was getting closer, we went on to the hashpoint, which we quickly found somewhere in the middle of the forest. We celebrated, placed two markers at a tree (one on paper and one on a plate of wood, Ilpadre brought that) and took lots of photos.

On the way back, we located two geocaches, one even within a kilometer from the hashpoint (Hash collision honorable mention) and Fivetonsofflax collected some trash from the forest (Geotrash achievement). We were back at the station Darmstadt Süd by 17:15 and took a Regionalbahn back to Heidelberg, We ate some more cake on the train, Ilpadre took a photo as we drove through the 2010-03-10 49 8 hashpoint he visited a few days ago.

In Heidelberg, Ilpadre Euterkuh and the reporter left the station, whereas Ekorren, Fivetonsofflax and Koepfel entered the S-Bahn to Karlsruhe, Fivetonsofflax left one station later in Kirchheim, Koepfel in Karlsruhe and Ekorren took a few other trains back to Tübingen.

others feel free to expand the report if I missed something

A reporter of the Rhein-Neckar-Zeitung, a newspaper published in and around Heidelberg, was with us on this expedition. He wrote an article on geohashing and this expedition, which was published on April 1st: 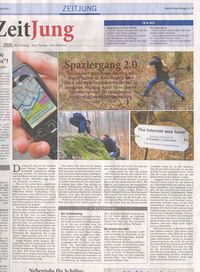