Eastleigh, near the railway station, off Campbell Road. Dee has checked it out and reports that the hash point is easily accessible. The area is mainly grass and mossy concrete. 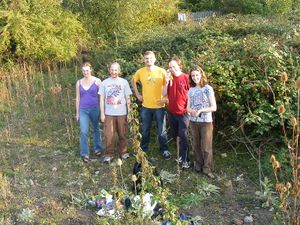 All 5 of us at the geohash 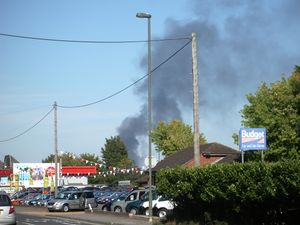 I had a transportation #fail by jumping on the first train i saw without checking if it stopped in Eastleigh. It didn't! Never mind, it was such a nice day and i had plenty of time, so i just walked the mile back from Southampton Airport Parkway. On the way i saw thick smoke and briefly wondered if it was coming from the hash point! I worried whether the hashpoint would be inaccessible due to fire brigade cordoning it off. I wondered whether the geohashers would get accused of starting the fire! (smoke signals gone wrong?!) But as i got closer i realised it was way beyond the geohash - in fact later on i learned that the fire was in Colden Common.

I caught up with Macronencer and together we walked over the bridge of Campbell Road. We saw JonRead drive past and then Dee. We all made our way to the geohash. We were a little bit worried about trespassing, but in fact it seems as if kids go in there all the time. 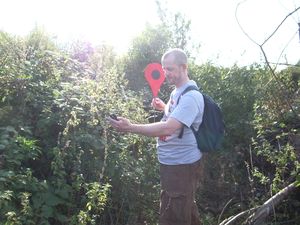 The land is nice and flat and big and open and great for geohashing ... except the geohash landed right at the edge in a bundle of brambles which were way more overgrown than either google or bing seemed to indicate! Still, we weren't going to let brambles hold us back so ignoring all threat of velociraptors, Mike charged right in and found the geohash. Followed shortly by the rest of us. 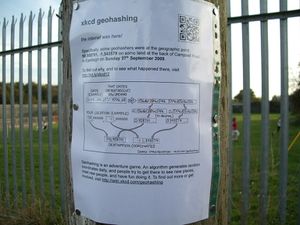 We left a poster for the world to see

Having marked the geohash, we set about the usual rituals ... hashscots, photos, videos, food. davidc arrived and added Rabbitfox to the snuggling hashscots! We ate a few blackberries and did some geotrashing. We tried to attract some ants with honey to spell out XKCD, but only 2 ants were in the slightest bit interested! I played The Lying Down Game at the geohash ... and attracted more ants than the honey did!

Before we left, we put a poster on the nearest pole we could find. Some kids went over to look at it straight away, and it seems within 15 minutes they'd left a message on the talk page! Sermoa likes this! :D We then all went to the Crickters Arms in Eastleigh for food and drinks! yay!

Not much to add to the above in terms of event reports, but I just wanted to say that it was great to meet Dee, JonRead and davidc and it was nice to have such a large group for a change! I think 3 people has been my maximum attendance geohash prior to this one. The location was definitely interesting, and I'm glad that my fears about access were unfounded. Strictly speaking, we did go through a fence: however, it was clearly a well-used path onto abandoned land and there was a second fence further in to keep people off the actual train tracks. Had a nice meal at the pub afterwards too - all in all, a lovely evening, despite my headache, although today I have noticed a number of raptor scratches from my first foray into the stupidity radius :) My thanks to everyone for coming along! --macronencer 12:06, 28 September 2009 (UTC)

I had rented a car the day before, ready for a week of exploration. Although I was born in England, I haven't lived here for nearly 10 years. This was my first geohash outside of 52,13.

I arrived at the end of the road around 16:30 and was booting up my 3G card to check the map when Macronencer called and gave me directions.

I don't really have anything to add to the reports above, other than that it was great to meet everyone and experience the English Geohash, in particular the novelty of the Lying Down Game. Unfortunately after a quick bite I had to leave the party to return home to finish up some work.

This geohash was part of davidc's European tour in Autumn 2009:

(I will use the picture of all 5 of us when Dee uploads it!)

This page can be found using the short link http://bit.ly/xkcd12

Mobile devices can use this qr code