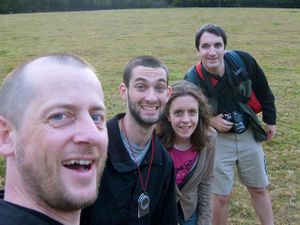 The four of us at the geohash

In what must be the most extensively planned geohash in history ... we've had the date set for over a month and it took a long irc chat to find a window of opportunity we could all manage ...!

Macronencer is arriving by car at Reading around 1630, to meet sermoa off a train, and the others off a different train, either at 1630 or 1700. We will all take the car to the hash point. Macronencer has done some research and found a page describing a walk that goes through Nott wood, next to the hash point. This is good! Now we know we can at least get fairly close. All it will take is a dash through the wood and over the field and we'll be there! It may be dark before we return to the car, so dress suitably and bring torches if you have them.

Oooo I have a torch! got a free torch plus screwdriver plus spirit level all-in-one from yahoo today at Future of Web Apps! How completely awesome is that?!! :) -- sermoa 23:27, 1 October 2009 (UTC)

Oh, what an excellent geohash this was! Our intricate planning paid off because we all arrived in Reading within minutes of each other. Macronencer drove us to Stoke Row where we parked at The Cherry Tree Inn. We walked approximately 2 miles to the geohash, briefly stopping to ask some locals for directions! The final walk through the forest was a little bit tricky, but by that time our stupidity radius had kicked in and we were completely determined to make it through to the hash field! 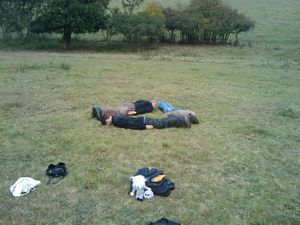 Playing The Lying Down Game (tm)

Interestingly, our entire walk had been in the Swindon graticule until at the very last minute we crossed the field over the longitude into London West. We found the spot and took photo evidence. The hashscots loved the big open field! Three of us played The Lying Down Game (tm) at the geohash! Thepiguy revealed the reason behind the name Pi! :)

The walk back was supplemented with brioche, chocolate croissants and oreos, generously supplied by Macronencer (thanks!!) I managed to stunningly mess up a video that Mike spontaneously decided to make without explaining what was going on! We attached a marker to a nearby post where we expect ramblers to walk by and notice it.

We all had a drink back at The Cherry Tree before Mike drove us back to Reading where we went our separate ways. So, until tomorrow ...! :D

No time to write up my expedition properly, but I wanted to say how much I enjoyed this trip! It was so cool to meet Thepiguy and srs0 - I hope you enjoyed your visit to England guys! The hash itself had just the right mix of difficult terrain, cool scenery, dogs, llamas, returning in darkness, beer and Lying Down (tm). A perfect recipe. P. S. Oh wow - do you think those birds we saw were kites?

I only had my phone, not a proper camera, so you'll have to wait for Srs0 for most of the photos. These will do for a start.

A select few pictures from the expedition (thepiguy still needs to put up the pictures I took using his camera of him petting the hashdog, as well as gps shots):

Use http://bit.ly/xkcd13 as a short link to this wiki page. Can someone arrange a marker of some sort? Doesn't have to be a poster.