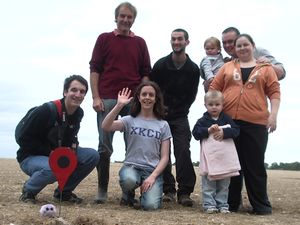 Geohashers plus our wonderful ambassador!

A field off Dean Lane, between Winchester and Sparsholt. Two miles from Winchester station, one mile from Weeke. Here's the route from the station to the geohash.

Thepiguy and Srs0 are coming on the train for London. Sermoa will meet them at Winchester station, at 13:18. We're going to do a quick tour of Winchester, see the Round Table, the cathedral, the museum, go to the best coffee shop in Winchester (Coffee House on Jewry Street). I'm really tempted to take a taxi to the geohash, think it would be so funny to tell the driver, "Please drive to 51.0763820, -1.3614881"! DavidMiller plus partner and kids are making their own way to the geohash after a walk up St Giles Hill. Mapaholic should hopefully also be able to meet us there. We will have food and drink to share.

I met Thepiguy and Srs0 from Winchester train station to do the tour of Winchester as planned. It was great! We met DavidMiller and family in town, went for a coffee together and then took a taxi to the geohash! I actually told the taxi driver the coordinates, much to my amusement -- and the driver's bemusement!

And we entered the field. And we located the hash point. And we took photos. And then ... DavidMiller saw a tractor in the distance! So DavidMiller and Thepiguy went off to try and obtain an ambassador achievement. I'll let one of them explain what happened ... but after a while they came back smiling - the farmer walking with them! 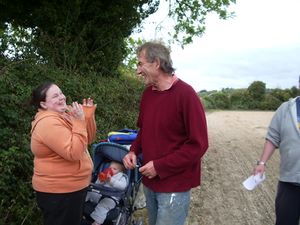 "You're all totally bonkers!"

Farmer Nicholas called us all bonkers (we didn't deny it!) and we all went back to the geohash point to continue the fun and frivolities!

Ambassador Nicholas was totally great, participating in photos and even signing our marker! We had a picnic, played The Lying Down Game (tm) did juggling and poi, had a great time! Our very deep heartfelt gratitude to Nicholas for allowing us nutters into the field and being totally cool about everything we wanted to do!

Walking back, we briefly visited the Eden Development cubicle geohash (our Canadian friends couldn't miss the opportunity to witness the world's closest recorded cubicle geohash!) before going back home. I already invited Thepiguy and srs0 back for pizza without knowing that there was an abduction geohash achievement ribbon! Accidental ribbon achieving, ftw! :D 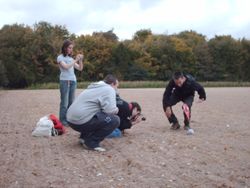 I decided today was going to be a nice day out. I took the kids and Kate up St Giles Hill to show Kate the stunning view of Winchester and stayed up there for about 30 minutes or so, letting the kids play around for a bit, took some photos and then headed back home. I also went geohashing again. This time though, Kate and the kids came along too.

First of all, Kate, the kids and me were going to get a bus up to the new Waitrose and then walk to the hash point from there as we didn’t feel like walking the entire journey. In the end though, aimee (Sermoa) told us that she was going to get a taxi up there with Kevin (Thepiguy) srs0, we said we would join her going by taxi which would make the kids journey much easier.

Once there we jumped out of the taxi, aimee (Sermoa) gave the taxi driver his money and a tip too! Lucky guy lol! From there we proceeded to the hash point. There was a hedge in the way, but luckily there was a nicely placed gap, so we could all get through. Kevin (Thepiguy) helped me get the pram over the hedge and barbed wire. We left the pram next to the entrance, took my daughter out (Chloé) and proceeded to the hash point. We got there, found the hash point and started taking pictures.

I left the group to go and get the picnic blanket and the kids drinks from the pram, that I forgot. When I got there, Kate shouted something to me and I couldn’t hear her, so she borrowed aimee’s phone and phoned me. I then noticed that the farmer was in the next field on his tractor and told Kate, she told aimee (Sermoa) and then they all came back to the pram. From there I said, why don’t I go over and ask for permission to stay in the field and have a picnic like we planned to. The group agreed and Kevin and Ryan came with me to find the farmer.

We eventually found the farmer and then asked for permission to stay in the field after explaining exactly why we were there. He looked confused. We took him back to the group and he stayed with us for about 15 minutes and we all talked mainly about why we were there. We took some photos of us all, we even got one with the farmer with us too. Just after taking the photos Kevin (aimee’s husband – Mapaholic) turned up and joined us.

After the farmer left us, we had our picnic, chat about every day stuff and then headed back to town. On the way back to town we took a detour to a old hash to show Kevin (Thepiguy) and srs0 the cubicle geohash of aimee's (Sermoa). From there we parted ways, aimee (Sermoa) went to pizza pan with Kevin (Thepiguy) and srs0 and then back to aimee's home. The kids, Kate and myself went into Tesco express and then on to pizza hut to have dinner! Yum Yum!

Ryan took the pictures that were taken on my camera. I like to give him the camera, as he gets some nice random shots from the height of a 3 year old. Some times they even turn out very nice. Unfortunately though, only 2 were usable! I will be adding some more photos on Monday evening if srs0 can get them uploaded to me when they get back to Germany.

Sermoa and Mapaholic earned the Abduction achievement
by abducting Thepiguy and Srs0 from the (51, -1) geohash on 2009-10-03.