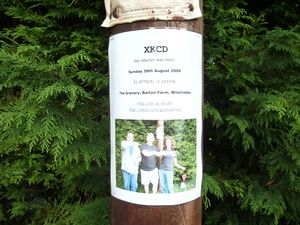 Claimed as a Cubicle geohash achievement for Sermoa to within 6 metres!

Sermoa: OH MY WORD! Would you believe it, that is where i work! It's on Barton Farm, in the car park of my office! I am away with my parents in 51,0 this weekend but i will do my best to get back for 4pm for such a special geohash. Mike thinks i might be the first person ever to claim the cubicle geohash!

I had the added excitement of having to travel home from Essex in order to get to this very special geohash! I managed to get the 12:00 train, getting back to Winchester at 14:43, giving me enough time to go home and prepare some stuff, also meaning that i qualify for the Walk geohash.

It was so funny making my usual walk to work, knowing that i was actually walking to a geohash! I got there at 15:50, by which time Mike and David were already there. I marvelled at the wonder of geohashing that had directed them both to my exact place of work without me having to give them directions at all!

After a little scuffle through the hedges (we thought initially it might be the other side) we found the point, or at least to within 1 metre of it. It was right at the corner of the car park, as we thought, and i have found photographic evidence of me working at the picnic bench with the hash point in sight! Cubicle geohash win? I think so! Or at least the closest so far! Somebody might still beat it yet, if it actually lands right on their office, but i claim the cubicle hash to within 6 metres.

Mapaholic arrived at about 16:10. We did the obligatory photos and videographical evidence. I recorded a little geohashing tutorial, which i'm hoping Mike will upload later. Then we set about the really important stuff: cake, fruit, crisps, drinks, chocolate, music ... office party!! My immense gratitude to Chris, owner of Eden Development for allowing us to use the office for a party! Chris would have come, but was out in the New Forest today.

I was wondering how to leave a marker of the event, and David had the excellent idea of printing and laminating a poster and stapling it to the telegraph pole. Which we did, and it worked very well! We were even able to include a photo of us at the geohash on the poster! Such are the benefits of having a geohash at your office with access to computers, printer, laminator and stapler, heheh!

Every geohash is different, and every one is fun for unique reasons. This was the first one where we've been able to go indoors, use the internet, have a proper picnic/party. It was, surprisingly enough, my first geohash in my home graticule(!?) and the first one i've walked to.

I was a little concerned about getting to this Sunday cubicle geohash, because, in an ironic twist, I was actually at work in the morning. However, I managed to get quite a lot done, so I packed up and went home, then drove to Winchester, arriving at the farm just before DavidMiller, who had walked all the way across town to get there. First GPS dances were not encouraging, and after David and Sermoa arrived we ended up burrowing through the hedge into the field to see whether it was there (I got a nice little nettle sting (raptor lick) but they don't bother me much). Mapaholic turned up while we were in the field, bringing the number of new people I've met through geohashing to 5. Not bad for a hobby that at first sight seems rather solitary. Always nice to be meeting people!

Sermoa decided that the hedge was no obstacle to her stupidity radius, and attempted to get through the (much harder) part of it where the hash seemed to be. However, it was tough going. Finally I tried another GPS dance and realised that the location was actually on the right side of the hedge after all, so back we all went. Eventually we established beyond reasonable doubt that the geohash was next to a telephone pole in the car park. You will see Sermoa's evidence on this page, so you can judge for yourself whether this was a true Cubicle geohash, but personally I think her case is a sound one.

The party was fun. There was cake, music, computers, a roof over our heads to keep the drizzle from us, and general jubilation. Not much more to say really! My thanks to Sermoa, DavidMiller and Mapaholic for being there, and also to Sermoa's boss for agreeing to let us in!

A report can be found on David's blog.

Proof of the cubicle geohash

There are videos to come, but this photo shows me working about 6 metres away from the geohash. It was taken 4 months ago by Chris, my boss, and the original can be found at http://yfrog.com/4o8a2j. I have lightened the image and annotated it. 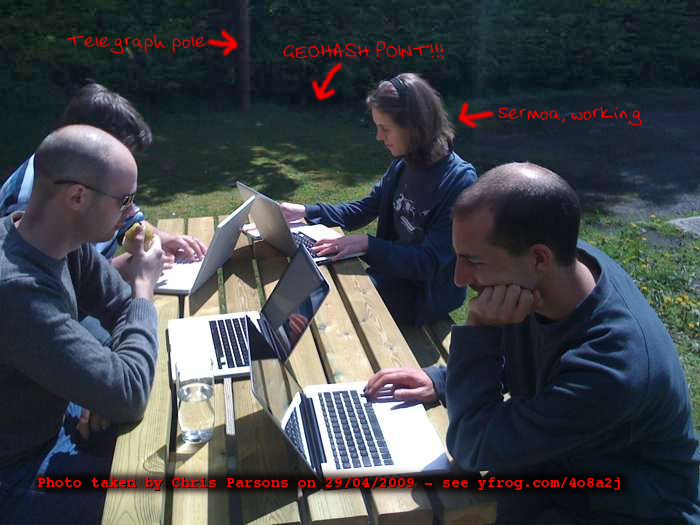 This image also proves that i have been there before, clearly! The bench has since been moved to the other side of the office which is why you won't see it in today's photos.

I have actually sat on the grass and worked about 3 metres away from the geohash on occasions, but you'll have to take my word for that ...!

For additional location proof you can see the edendevelopment.co.uk/contact and compare the address with the peeron map.

Other geohashing expeditions on the same day

On 2009-10-03 Thepiguy and Srs0 were visiting our graticule for a geohash between Winchester and Sparsholt. Since it was almost on the way back, they couldn't miss the opportunity to visit the world's closest proven cubicle geohash! :D

Geohashing at Eden Development - on the company blog, FTW! :D