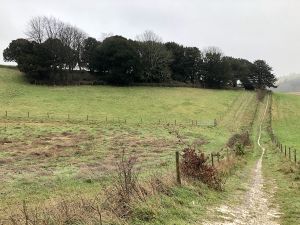 Next to some trees near a footpath close to the Queen Elizabeth Country Park visitor centre.

Macronencer is planning to go.

Macronencer plans to visit, and perhaps call on a friend who works in the park. Said friend might even assist with a drag-along achievement, and/or lend a hand with permission, should there be any access issues.

I wasn’t going to go hashing today... yes, that old refrain! The thing is, when you have a week off work and want to get fit again, it almost seems like an obligation. 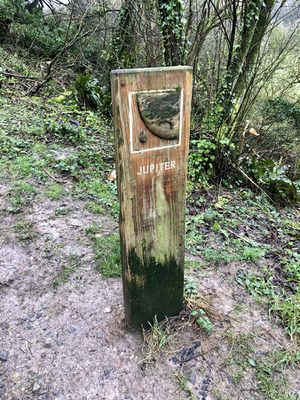 Today’s hash point was close to a place with which I’m very familiar: [Queen Elizabeth Country Park]. This wonderful area of natural beauty and recreation sits just east of the A3, north of Portsmouth. I’ve been there a few times, and I know someone who has worked there as well. I was hoping to bump into him today as I haven’t seen him for a while, but he didn’t seem to be around.

I took a scenic route across country to reach the park, and later on when I looked at it, I realised that, with a few modifications, it might have qualified me for the Juggernaut_achievement. That’s something I’d like to get, one day. Never mind! There was a little drizzle, but it eased off before long.

My original plan had been to park in [Butser Ancient Farm], a wonderful place where they re-create historic methods of farming and building, and also have amazing events like Norse and Saxon storytelling, and in May this year, the burning of a Wicker Man :-O It’s where I’d hoped to find my friend, but not only was he not there, there were also several coachloads of children and the car park was full. A friendly staff member, when I mentioned that I was “from the internet”, advised me to park in Chalton and walk back down the road. The path that runs past the hash point, you see, ends up on this road. However, when I’d driven to Chalton I thought it would be too dangerous to walk back along the road, which, though not busy, had lots of blind spots and was about a mile long. So I turned round and headed back up the A3 a short way to enter QECP.

I’d already worked out that the path I wanted to walk was the same one I’d walked years ago with my son: the Space Trail! It’s a clever idea. They begin with the Sun at the car park (it’s carved on a post), and as you walk round, you encounter all the planets, spaced at the correct intervals to match the orbit of Earth. The result is that you see Mercury, Venus and Earth, and then Mars, before you’re properly out of the information centre grounds, and then have to walk quite a way before reaching Jupiter. To see the whole Solar System you have to walk quite a distance! The path I needed jutted south from one corner of the woodland, into some fields, and reaching it wasn’t too much effort (although once again, the February rains had created a load of mud).

As soon as I saw the hash point, I knew there was a potential problem. There were two long gates between me and my destination! They had barbed wire across the top, but they were unlocked and there were no signs. I later figured the barbed wire was probably just to stop people climbing over. I have a natural anxiety about breaking rules, so at first I looked about for an alternative route... but it seemed there wasn’t one. The closest I could get while on the path was 45m away, which was a CNR. While I thought things through, I watched a buzzard hunting. Couldn’t get a good photo, sadly. Maybe I should put my DSLT camera and telephoto lens back into service...

In the end, I got a little annoyed with my own trepidation, and just went through the gates. After all, there were no animals or crops in the fields: it was rough pasture. I’m so glad I took that step! I reached the hash point at last, and was able to walk back to the car happy. On the way, I saw deer tracks, and shot some video of a really nice quiet bit of forest. There was a sign up on one of the trackside trees that suggested making a work of art from leaves and twigs, and photographing it. So I did. I made an XKCD marker :)

All in all, a nice trip despite another rather dull day. At least I haven’t been rained on this week yet!