Macronencer plans to reach the hash with the aid of rubber boots. He has learned a lesson from last week.

By the way... I've been here before, and it was around the same time of year! In fact, the other hash was about a mile or so from this one. It's interesting to recall that the one seven years ago was freezing (for the UK in March, at least). There was actual snowfall at one point. I wonder how cold tomorrow will be?

So here I was, attempting my third ever multihash, and facing my recent enemy: the Alligator-Infested Swamps of the New Forest. This time, however, I meant business. This time, I had brought Wellington Boots. 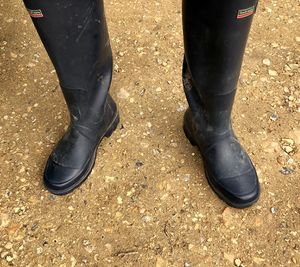 On the way back from East Dean I posted a birthday card, then got onto the A27 and suffered the roundabouts, got onto the M27 and suffered the 50mph speed limit, and finally got onto the fact that the New Forest remains equally lovely in every season. Actually, I see it less in the summer, because, being local, I don't have a particular desire to join the flock of humans that fill it to bursting point like sheep in a pen at that time. (Thinks: I wonder how the COVID19 pandemic will affect that, if at all, this year...)

The hash point was quite near Fritham, which I'd visited before. There were ponies. There were potholes on the track into the car park. There was cold March wind. All of this was repeated on this occasion, in a quite familiar way. It was a bit nostalgic, really.

I put on my wellies, and crossed my fingers that none of the water I attempted to cross would come over the tops of them. Nearby, a young family were walking near the guardrail. I think they were from one of several camper vans parked there. They smiled and said hello. It's nice to see somebody being polite and civil these days. Living on Twitter tends to make you think everyone is a jerk.

I reached the first mud. The wellies coped easily. I forged on and on, through pool after pool of mud, exultant that I had conquered the squelch at last! The hash was within my grasp. Bwahahahaha! It was a pretty easy find, but was the other side of a stream, so I was required to put the wellies to the ultimate test of being attacked by a vicious hoarde of dihydrogen monoxide molcecules. 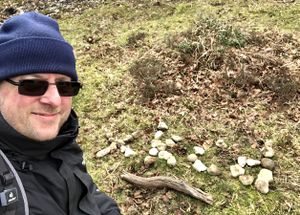 I made a marker from some pebbles near the stream, and then took a few photos of interesting trees. That seems to be one of my favourite things to record! As I made my way back through the trees, I noted how peaceful it was. Again, this was doubtless due to the fact that it was still only March, but still... it was nice. Birdsong rang from the canopy, all the fallen trees made a nice obstacle course to challenge my footwear, and the sun and wind were set to "just right". I was extremely happy with the trip, though my legs were very tired by then.

When I got back to the car, I checked the hash points for the weekend. I'd had some crazy idea about getting Birmingham and Shrewsbury hashes for my Minesweeper achievement, but they didn't look all that great. Later closer examination confirmed this, and I think perhaps I'll take a break from geohashing this weekend and work on something else. My book needs to get finished!