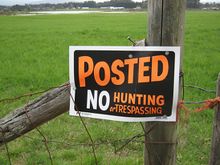 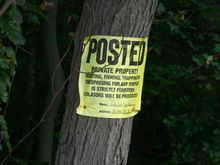 This achievement is awarded to geohashers who have the good judgment and respect for others to repeatedly divert their adventures because of respect for the people whose fences, no trespassing signs or other requests for privacy bar the way to geohash coordinates.

Earn this ribbon by attempting one hundred geohashes for which coordinates were not reached because they lay on property to which there was no public access. In other words, suffering through one hundred No trespassing geohashes qualifies you for this achievement. There does not have to be an actual sign, just your knowledge that you have reached an area where you are not permitted. You must have actually attempted each geohash and been stopped chiefly by the immediate presence of an area without public access. See the No trespassing consolation prize for more clarification.

It is recommended that geohashers interested in this ribbon create a user subpage listing their Category: Not reached - No public access geohash results in a way that clearly displays the number. Each "no trespassing" geohash you claim should link to an expedition report showing or describing the sign, fence or checkpoint that turned you back. Ideally post a picture of the no trespassing notice. (Don't forget to categorize the photo as a sign so as to add it to the gallery).

It is understandable that expeditions that took place prior to the creation of this achievement might not have the no-trespassing aspect thoroughly documented, and that does not disqualify the long-term geohasher from claiming this award.

A thwarted geohash still counts towards this achievement if the posted area was also physically inaccessible, e.g. if the no trespassing signs were displayed on a cliff or riverbank that the geohasher might not have crossed anyway. If the geohasher didn't actually exhibit self restraint but was simply unable to overcome the security measures keeping him or her out of the area, he or she should pretend to have stopped out of respect, and preferably demonstrate that restraint on the next encounter with a fence or sign that could be ignored.

If a geohashers chooses to enter private property despite the presence of fences or signs indicating that they are not welcome, that geohash does not count towards this achievement (or any others), as it is against one of the earliest rules of geohashing.

Disclaimer: When any coordinates generated by the Geohashing algorithm fall within a dangerous area, are inaccessible, or would require illegal trespass, DO NOT attempt to reach them. Please research each potential location before attempting to access it. You are expected to use proper judgment in all cases and are solely responsible for your own actions. See more guidelines.

Under no circumstances can a geohash be counted as Category: Not reached - No public access if it is claimed as a success or if any achievements that require reaching the coordinates have been claimed for that geohash.

Any geohasher who is arrested or shot for trespassing forfeits all accumulated no trespassing geohashes.

Local custom and law varies from place to place, and geohashers should respect local practices and err on the side of caution when visiting unfamiliar areas. It is never appropriate to brag about ignoring signs intended to keep you out. 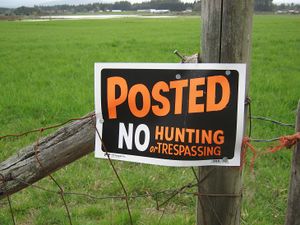 Respecting the privacy and wishes of property owners, even when the trespass would certainly do no harm contributes to good will towards our sport. Behaving as though rules and property laws do not apply to you shows disrespect not only to the landowners but also to your fellow geohashers, who could suffer if you give the sport a bad image. It wouldn't take much for the media to misrepresent the sport as "participants score points for getting access to private property."

Often not getting to an exact point is as fun as getting there, but this ribbon is an incentive for the former. When you locate a landowner or guard but your request for access is turned down, please be as gracious and as courteous as possible. It is hoped that the few geohashers who are so focused on winning ribbons that they might be tempted to be rude to such people or violate private property will be inspired by this ribbon to be gracious and turn back when good citizenship dictates, happy to have scored another No Trespassing for their collection.

The name of this achievement is a tribute to the fact that many American No Trespassing notices feature the word POSTED, often with more prominence than the prohibitions they post.

Retrieved from "https://geohashing.site/index.php?title=Posted_achievement&oldid=185767"
Category:
This page was last edited on 22 July 2015, at 12:58.
Privacy policy
About Geohashing
Disclaimers