Now that we have a proper achievement page, I think we should vote on this (and hopefully make it an official achievement soon!) --HiroProtagonist 23:59, 30 October 2010 (UTC)

As far as I see, all we need is a ribbon! Any ideas? I don't find any from Category:Icons especially fitting, and I'm definitely not good a creating one! --HiroProtagonist 00:42, 22 November 2010 (UTC) 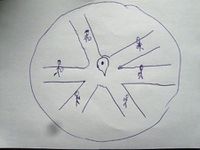 I'm not good at creating or even finding pictures. However, I have a spontaneous idea - if anyone more skilled volunteers to turn that into an actual icon, here is my fast sketch --Ekorren 10:38, 25 November 2010 (UTC)

My suggestion would be a flock of birds flying in a V, as that is the most representative of "migration" to me. --aperfectring 22:13, 9 December 2010 (UTC)

I was bored today and made something, but I was stuck on a computer with paint as the only editing program... Feel free to replace with more diligent version! --HiroProtagonist 21:47, 10 December 2010 (UTC)

There is a proposal for redefinig this achievement to mean that people from X (e.g. at least 5) graticules need to meet. Please give your opinion! (at the bottom, under "Terminology"

Okay, this achievement has been listed on the main page for a long time and no one has wanted it or made a page for it. That's because no one thinks they'll ever see 50 people at a geohash.

Well, that wouldn't be migration. I figure this could only happen if the hash occurred at a major event, and the count included non-hashers. I like the idea of a meeting hashers award, but see it as something quite different to this.

Hashers in my grat:3

That's what I mean, it's an achievement that no one is going to get unless they live in San Francisco or Boston. No one has wanted to even make a page for it. It's not inspiring anyone. Every time I look at the red link and try to make a page for it I just think "meh." It would be migration if you met the fifty people in different graticules. -Robyn 04:35, 30 October 2008 (UTC)

I think it's worth leaving, but perhaps consider reducing the number from 50 down to say 15? (ie still a sizeable group, but much more likely). The largest hash we have had here in Sydney had 9 people attend (I met 6 people I didn't already know), and I very nearly got together group of around 20 for one of the hashes, but plans fell through... --CJ 13:58, 30 October 2008 (UTC)

It could have ranks, or perhaps just be for meeting lots of people, and the individual can decide what's lots and the ribbon can show the number. So for each page it would show the most people a particular geohasher has ever met at a geohash. One is impressive in, say, Slave Lake, and 50 remains impressive in San Francisco.-Robyn 14:04, 30 October 2008 (UTC)

Yeah I like that idea. So it could be an upgradeable ribbon that you have one of on your userpage to show the largest hash group you have been a part of, and how many people were in it... --CJ 14:06, 30 October 2008 (UTC)

Exactly, CJ. We can even use the same image and a different colour from the ribbon for most geohashers at a meetup. -Robyn 14:12, 30 October 2008 (UTC)

There is an idea to redefine the migration geohash to a geohash gathering people from several other graticules on Talk:2009-02-22_51_10. Copying the parts dealing with the achievement:

Hey guys, collecting people from all over the country to hash? I'd vote for a redefinition of the migration geohash for this kind of expedition. -- UnwiseOwl 00:07, 23 February 2009 (UTC)

How would you define the migration hash then? Who gets the award? Is it "For attending a geohash with people from a minimum of five different graticules"? -Robyn 00:03, 24 February 2009 (UTC)

The old one is pretty useless as there is hardly a chance to get that unless a preexisting group (i.e. one that would also exist without geohashing) would decide to go on a whole. --Ekorren 00:21, 24 February 2009 (UTC)
IMHO a migration geohash achievement for a meetup of people (starting from | living in) various graticules would make more sense than the current abandoned definition. For a more obscure naming, the Hash Tree may also be appropriate (although I think that reference is a bit too obscure to be recognized). I would like to see a minimum of not less than three and not more than five, to make it a bit of a challenge but not impossible. The 2009-02-22_51_10 meetup gathered people both starting from and living in five graticules, and I doubt we'll see that again very soon. --Ekorren 11:18, 24 February 2009 (UTC)

I oppose any redefinition which deviates from the original meaning of meeting more than 50 people at a single geohash. -- relet 21:19, 11 August 2009 (UTC)

I don't think there really is an original meaning except of getting together a large meetup, whatever large is. Also I think gathering people from several graticules fits the migration theme much better than just meeting up with a large group of mostly drag-alongs. Given that many people expressed the wish to find a new and useful definition, although the proposals go in different directions, I see the old version as already rejected, or maybe one of several proposals no decision has made about. --Ekorren 21:40, 11 August 2009 (UTC)

To me, this achievement would mean something like "a geohash achieved with people from at least (e.g.) 5 different home graticules".

Therefore, I suggest stopping this debate and making two SEPARATE achievements. One would be for "people from X graticules" and the other would be "at least X people". The former would be this Migration achievement, the latter would be the Congress achievement (or other suitable term). --Davidc 21:55, 11 August 2009 (UTC)

I would like to concur with Davidc, that it should be "people from X graticules". I wouldn't be opposed to attending one somewhere in the US of A if it was well planned out. But people already complain about using large amounts of fuel, this would require enormous amounts of fuel as in I don't think if this happened would anyone ride a bicycle to. --NWoodruff 14:19, 18 August 2009 (UTC)

What about having a rule stating that people who did not burn fuel to come are counted twice, or something similar ? --Crox 22:54, 19 November 2009 (UTC)

Also support to have "migration = people from X (=5?) different graticules" but I oppose "congress = at least X people", for that I think the Largest geohash achievement is in use and I don't see a need to have another one. --HiroProtagonist 20:17, 30 January 2010 (UTC)

HiroProtagonist has a good point, one more reason to redefine the achievement as "people from X graticules"... do we have a consensus? then we can work out the details. --Crox 20:35, 6 September 2010 (UTC)