An implementation is a program that takes the method shown in The Algorithm to calculate the geohash location, presenting the user with text coordinates, a map, data for a navigation device, or some other information that facilitates reaching the geohash.

If you're looking to code your own utilities, you will need a source that provides the Dow's opening price for any given day. Details on such services are available at Dow Jones Industrial Average.

It cannot automatically apply the 30W rule, as it doesn't take your location into consideration. If you're East of 30W, call it with the -e option and it will yield the correct results.

Any problems or issues should be mentioned to Zigdon either on the wiki or in the Geohashing IRC channel, as well as posted at Talk:Implementations.

MediaWiki half-implementation (for use by template creators). 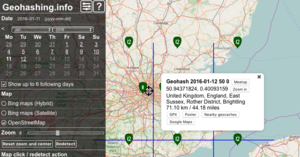 An implementation using openlayers. Gives 3 x 3 hashes, with option to download as GPX. Uses geo.crox as data source. This implementation works very well on both desktop and mobile.

See the help on the site for url parameters.

Small Hash Inquiry Tool is an online tool Ekorren built to his own needs but later rebuilt to be globally usable.

Compared to the nifty tools like those for the iPhone, this one looks ugly to the end. Which was intended as it should be stripped from all colourful overhead, featuring just basic compressed information, all on one page and from everywhere.

Usage information is available from its own page. 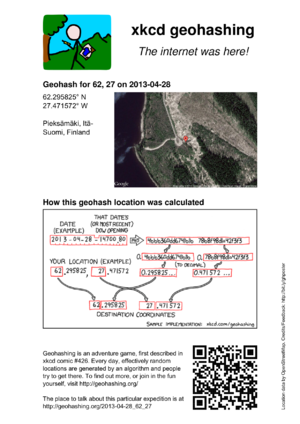 This tool produces a PDF document that can be printed out, similar to the ones that were available from Active Geohasher.

Posters are available from the following URL:

From an expedition page, you can link to the poster like this:

Future plans include creating a graphical selector for the graticule, and area of interest.

Note: This tool uses a private data source that needs to be manually updated, so it may be missing the last week or so of recent hashpoints. 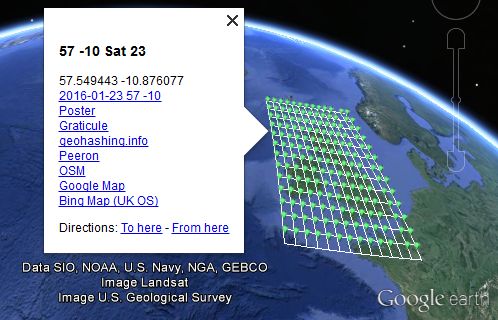 Please double check the output - it has been tested but ...

Sourcerer has made a geohash KML calculator. The source code is available on GitHub.

Well there's no point having a dog and barking yourself.
Google Earth Desktop has powerful functionality and there's not much point re-inventing these features.

Usage instructions, bug reporting and feature requests are on the Sourcerer/KML tool page.

See: Dow Jones Industrial Average for a list of data sources for the DJIA openings.

Subscribe to a feed that updates as soon as each day's meetup is calculable for your graticule:

If you visit the URL with no parameters, you will be prompted for your graticule coordinates.

Another RSS implementation, coded by Matty K. This one simply provides a graticule's coordinates for a given day, and gives links to both Google maps and the peeron maplet. It is recalculated at every request (so please don't hammer it, or my website will run out of bandwidths).

For example, the link for San Francisco's feed is: http://geohashing.kerwin.net.au/rss.php?ll=37,-122

After registering, it will automatically notify users about all hashpoints as soon as they become available. Graticules are divided into 100 sub-graticules to allow users to only be notified when a hashpoint is near home, or alternatively, for all accessible hashpoints in a graticule. For more information, see the program's page.

Scan to find the app in the Market

Geohash Droid, a simple Geohashing app for Android phones, can be found here in the Google Play Store as a free app. It gets the stock and hash values, plots it out, and follows you as you get closer to it. It also has wiki-updating features and can automatically figure out what graticule has the closest point to where you are. Simple, effective. There's more stuff planned, but that's later.

The project itself is hosted on GitHub. The most recent version (as per this writing) is 0.9.5.5. If you go from the Play Store (far easier), feel free to leave reviews and such. If you have something specific to say, please file an issue at the GitHub site or email CaptainSpam.

gHash for the iPhone (under development) 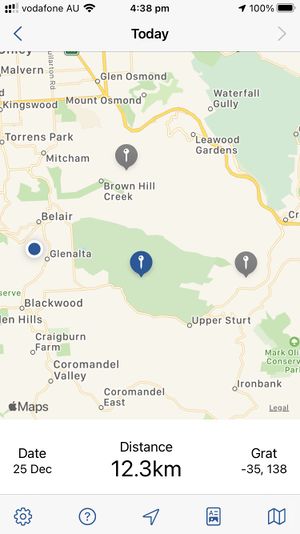 gHash for iPhone (work in progress)

This is not yet finished, but if you’re interested in learning more or being a beta tester let me know on my talk page. 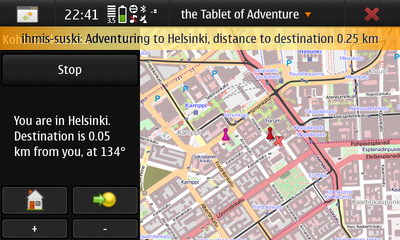 The Tablet of Adventure is a social adventure gaming tool that supports geohashes. It is available for Maemo 5 (Nokia N900) from Maemo Extras.

With TToA you can seek geohashes in your area or create your own collaborative adventures and share them via Qaiku.

Source code is available from GitHub.

Run this program once a day (for instance, per crontab) to get email notification whenever Google Maps indicates the daily target is nearer than a specified range. The first time around, run it from the commandline to configure. Configuration is stored in ~/.geohash/geohash.cfg. Use --help for info about commandline parameters. Source. Linux 32-bit upx compressed binary. - Ported it again to my own language. Source. Linux 32-bit binary

A geohash and globalhash library in Clojure: https://github.com/timmc/geohash

Maintained by Phyzome, who also runs an email autoresponder that uses this library.

A Java port of the Python implementation can be found from GitHub.

If you're going to be away from internet access, you'll need to compute the hash locally:

Reusable code library that can be used from any perl program:

Alternatives to the official implementation can be found at Implementations/Libraries/Perl.

A python script by User:Cole that can calculate geohash coordinates, given a graticule. It can calculate globalhashes as well. It is meant to be used from the command line, but is based around functions that can be used for library usage.

Various code snippets can be found at Implementations/Libraries/Python.

There is Python package xkcd.geohash which is independent of the interactive coordinate calculator (but uses Google Finance as well).

In Python 3.1 and above, an implementation of the geohashing algorithm is included in the antigravity module. Unfortunately importing the module will open a web browser.

The source for the Atom feed is available through anonymous svn here: https://staticfree.info/svn/ghfeed/

This implementation uses web.py to give simple, clean URLs. To contribute to it, please contact xxv and he can set you up with commit access.

Available on crates.io or GitLab.

A C# command line tool, using dotnet core 3.1, where the implementation can easily be copied to other projects. Just copy two files and don't forget to mention where you found them.

Relies on geo.crox.net for the Dow Jones industrial average.

A python class to recreate the original comic, but for any given date with your own coordinates! Created by Hugo.

The comic creator has been moved to github: https://github.com/hugobuddel/geohashingcomic

It used to run as a cgi service, but these are all down now.

In the image, Dow values less than 10,000.00 are padded with leading spaces, however in the algorithm it is not so it is compliant with other the algorithms. As Tim P suggested, the comic is akin to all the bank cheques with "19__" printed on them being used in 2000. The "form" has 5+2 "boxes" because that's how Dow prices are now, but that doesn't mean it can't be different.

Because the Shmulik bot and relet are not online Eupeodes created a new bot. Over the coming time features will be implemented in an attempt to fill the gap left by shmulik. Documentation can be found on Eupeodes/Hashie

These do not calculate the hash, but instead the probability of the hashpoint to land in certain areas.

The HashPlacer is a perl script that allows you to define limit boxes on a map, and will notify you via email if the day's geohash point lands in one of these boxes. This is especially useful if you define a limit box surrounding your favorite park, or your neighborhood, or even your couch. Currently the only areas supported are "boxes"... two latitude points and two longitude points define the corners of a graticule-shaped "box".

GeoHistory is a perl script that outputs a [kml] file containing every historical geohash point in a specific graticule since a specified date. This can be used to get a retroactive Couch Potato Award, apply for a Curse of Unawareness Award, or simply study past geohash points.

Linux users can use this bash script to give them desktop warnings of nearby geohashes. notify-send, bc, sed, xml_grep are needed to run the tool. It will but has not been tested within cron at the time of this writting.

These were created to help people display their regiohash achievement progress.

Retrieved from "https://geohashing.site/index.php?title=Implementations&oldid=33781#gHash_for_the_iPhone_.28under_development.29"
Categories:
This page was last edited on 4 May 2013, at 21:34.
Privacy policy
About Geohashing
Disclaimers