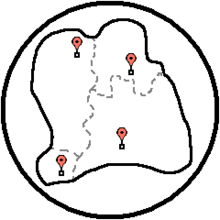 This user earned the Subdivision geohash achievement
by reaching hash points in all {{{subdivisions}}} of {{{region}}}.

Awarded to anyone who visits a Geohash in all possible subdivisions that contain land that are part of a particular region.

For example, someone who visits a Geohash in each of the 5 boroughs of New York City would be eligible for the Subdivision Geohash achievement for New York City on borough level.

This achievement is not awarded in the following special cases: 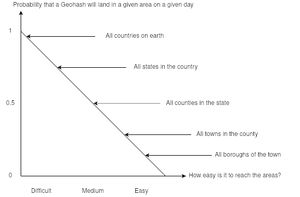 The easier it is to get to the subdivision, the longer the time that it will take for a geohash to land there.

The Subdivision Geohash is not easy to achieve no matter which size the region is.

You can find templates for some common regions with their common subdivisions HERE, already laborously typed by somebody else. No need to do the work twice.

Regular proof of reaching a geohash, with one for each possible subdivision for a day where a geohash fell within the applicable boundary.

Retrieved from "https://geohashing.site/index.php?title=Subdivision_geohash_achievement&oldid=832540"
Category:
This page was last edited on 4 March 2022, at 20:33.
Privacy policy
About Geohashing
Disclaimers